My Sunday morning began with a message from a Kaspersky Daily editor: “Denis, a while back you wrote about developmental games for children. That post of yours is a bit out of date now, but the topic is more relevant than ever, with millions of families trying to coexist in self-isolation. How about a new one?”

One of the surprises of social distancing * for my family has been the blurring of certain boundaries. Workdays and weekends look about the same, but something new has emerged: a sort of hybrid time. We maintain our learning and working duties, but we also have a lot of time that used to get eaten by commuting and other travel-related tasks.

More than four years have elapsed since my last list of what I’ll call games with benefits. Educators have developed new theories and methods of instruction, and developers have released new apps. My kids have grown up some, and we have some new ones as well.

But my attitude toward computer games hasn’t changed. Electronic games are here to stay, so to disavow them would be to deny reality — and to saddle our children with a real strategic disadvantage for the future.

When it comes to games, I think resistance is futile, but it’s better to take the lead and manage the process than to throw up our hands. We can use fun apps and games to help kids learn what computers are for, demonstrating that technology serves us — and not the other way around).

Of course, any parent will tell you that forbidden fruit tastes the sweetest. How you choose to introduce and manage your kids’ gaming is, well, your choice. We have found, however, that kids’ digital activities need some measure of control. As in the adult world, issues of addiction, asociality, and potential stranger danger abound. So, taste that fruit together, but keep in mind time and other limits! Some elements to consider are game genres, person-to-person interaction, and of course the basics of our relationships with smart devices (including cybersecurity rules).

In busy times, giving your digital natives free rein can be a major temptation — you get time to relax, they get privacy and freedom in a terrain that’s deceptively welcoming to them. This current period of social distancing is your chance to spend some time blending your knowledge with theirs — safely.

Submitted for your approval are some of my kids’ favorite smart mobile games and really interesting educational apps that we’re all having a great time exploring together. 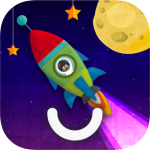 How’d they make that thing? What about that one? How does that other thing work? Those and a million other natural science questions swarm in kids’ heads, routinely spilling out while you’re supposed to be working.

This series of fun and enlightenment apps by Learny Land aims to relieve the pressure: 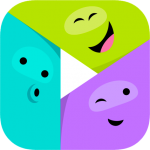 Adults and children alike benefit from shaking up the ol’ gray matter. I have to confess: REBUS is my favorite diversion during flights. According to the makers, solving a rebus “will make a pleasant snap in your head.” More to the point, rebuses involve solving visual puzzles by making logical associations.

Some of the problems are tricky enough for days of pondering. Others crack open like peanuts, one after another. Together, they make for a great exercise to train outside-the-box and combinatorial thinking. For kids who aren’t quite ready for such challenges, the authors offer AZZL — though only for iOS. 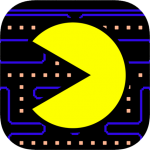 Oh, the nostalgic memories! Create new ones with vintage titles such as Digger (or Dig Dug), Lode Runner, Tetris, and PAC-MAN. Even after several decades, the games we grew up with are still very much alive. Turns out the gameplay dynamics are an enduring bit of genius.

Games from Czech studio Amanita Design stand out for their astonishing level of detail, their unusually vibrant characters, and their fascinating magical worlds.

Designed in the spirit of the classic quests of the 1980s and 1990s, the games elegantly force the brain’s cogs to turn in unfamiliar patterns, busting out of habitual problem-solving routines. If CHUCHEL gets too easy and you want more, try the studio’s other games: Samorost 3, Machinarium, and Botanicula, and, for the smallest ones, Pilgrims. 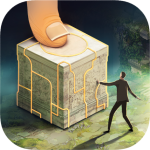 It’s hard to be a god. In Pavilion, various otherworldly signs spur the principal character to action, a setup the creators aptly position as a “fourth-person puzzling adventure.” If that alone isn’t enough to arouse curiosity, I don’t know what is. Personally, I’ve never regretted spending those four bucks.

6. A visit to Lumino City 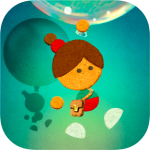 Speaking of well-designed adventure quests, another favorite is Lumino City.

I might have simply listed the game under Pavilion as “similar,” but I just couldn’t bring myself to bury it that way. This game deserves all the attention you can spare for its stunning aesthetics and stage sets. The developers have essentially erected a monument to themselves, and styled it after the puppet-animated films of 1970s and 1980s. For an appetizer, I suppose, you might first want to view the Making of Lumino City. Amazing!

If you enjoy Lumino City, check out the prequel, Lume. As of this writing, the authors have made it free in the App Store. 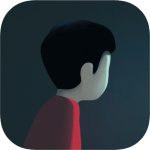 A game by the authors of the old hit LIMBO, Playdead’s INSIDE is about a little boy’s adventures in the afterworld. Sounds creepy, but you just can’t take your eyes off the thing. Parents can sit back and admire the artistry while their kids play.

If your kids have already completed CHUCHEL and Lumino City, once REBUS is a piece of cake and they’ve dug in to Pavilion and INSIDE, it’s time to install Gorogoa. It is an original puzzling adventure with exceptional gameplay dynamics.

Well, at least I’ve never seen anything quite like it before. Frankly, I was stupefied for the first few minutes, unable to make heads or tails of it. But as soon as you figure out what end to pursue and how … this game may haunt your dreams. 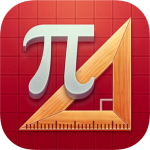 If your kids can’t pass up the opportunity to show off their knowledge of Euclidean geometry to their peers, the easy and entertaining app Pythagorea is for them. Who knows, maybe you put a future famous architect or mathematician to bed last night.

Minecraft completed my previous list of top 10 mobile games, and it’s closing out this one as well. This time, keeping things fresh, it’s Minecraft Earth.

On that note, I wish you a healthy and productive self-isolation period! Take good care of yourselves and others.

*Note for future readers of this post: In March 2020, when I wrote this, many countries had introduced rigorous measures to contain the spread of the novel coronavirus infection, aka COVID-19. One of those measures was social distancing, minimizing contact with other people and teleworking from home.

While auditing Web applications, our experts found a vulnerability to enumeration attacks. Here is a description of the problem and how to combat it.