It’s that time of month again when we catch you up on anything you may have missed in October. So take a peek at some of our top posts from the past month. 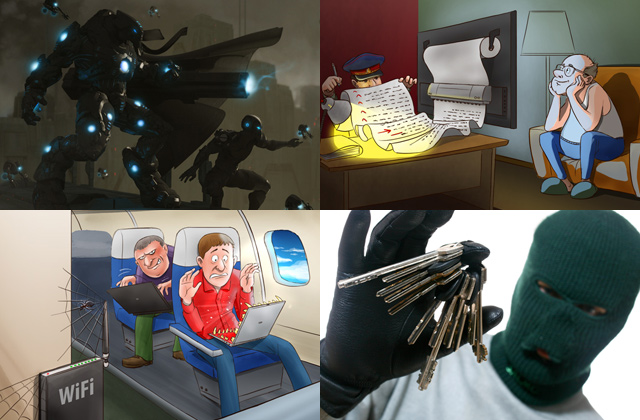 Have no fear, iPad!

Although it’s been a long standing myth that Apple users are at no risk when it comes to the dangers of downloading malware, that idea has vanished over recent years with the growth in the number of phishing schemes targeted at iOS users. But not to worry Apple fans! Kaspersky Lab is proud to introduce iOS owners to our new Safe Browser, which is designed to protect against malicious websites. The browser prevents users from visiting phishing sites by checking every link that is clicked and every address that is typed in with our cloud-based Kaspersky Security Network, which contains threat information collected worldwide and updated in real-time. It even allows you to block access to particular sites.

Banking Trojans hold a large presence within the world of malware, but most are heard of once before vanishing. There are, however, a big four whose reputations have stuck around that you should know about: Carberp, Citadel, SpyEye, and the biggest, Zeus. Carberp was originally designed to steal users’ sensitive data, like online banking credentials or username-password combinations for other high-value sites, but eventually evolved to a point where its maintainers were able to give their trojan the ability to encrypt stolen data as it passed between affected machines and their C&C server. Then there is the Citadel Trojan, which was dangerous in its own unique way, using an open-source development model that let anyone review its code and improve upon it. And then there is Zeus, the ultimate Trojan that infected tens of millions of machines and resulted in the theft of hundreds of millions of dollars, and was amongst the first pieces of malware to be sold via license. The much lesser SpyEye actually merged with Zeus at one point to create a mega banking botnet.

Fake Antivirus: What Are They And How Do You Avoid Them?

Have you ever been browsing the Internet when a pop-up message or banner appeared, advertising antivirus software to you? Fake antivirus are a large threat you need to be on the lookout for when conducting any business online nowadays. They are designed to look legitimate and often times encourage victims to remove viruses from their system, perform updates, or install new software. They can be advertised to you as banner ads, pop-ups or email links, and can even appear in results streams for people who have searched for an antivirus product. So how can you protect yourself against them? Never install any program or software without researching the reputability of the company selling it beforehand, and pay attention to warning signs, like a lack of a logo on the pop up messages you see. Also be sure to use the security settings that are offered to you by your current antivirus, and remain educated on the latest scams that are out there.

Your Online Reputation and How To Protect It

Have you ever thought about how your web behavior is shaping your online reputation? It’s time to learn what steps you should be taking to ensure it’s protected. The best place to start is to search your name to figure out what’s being said about you. From there you can do things like claim a profile on all available social sites under your name, publish positive content about yourself on them, and always refrain from revealing personal information about yourself on them.

Quantum Computers And The End Of Security

Even though a quantum computer is unusable for most daily tasks, it’s able to quickly solve mathematical problems for modern encryption algorithms. “Quantum computing” and “Quantum cryptography” are based on quantum effects like superposition and entanglement of micro-particles. While an ordinary computer uses bits and bytes, which are strictly 0 or 1, a quantum computer uses qubits (quantum bits), which are able to be in several states simultaneously and perform well with probability-related or optimization-related task solving. Quantum devices will remain niche for many year though, which is why it’s too early to dismiss math – classic cryptosystems, which are able to work over any physical communication channel, and will remain in high demand for many decades.

Top Cybercriminal Prosecutions Of The Month

Non-stop cat and mouse We all need a vacation or at least a weekend to catch our breath a little and get going again. Only the criminal world works non-stop.