Despite our dismay in how much of a presence computers have in our kids’ lives (in all senses of the word), it is an unavoidable part of our evolution that you simply cannot ignore. 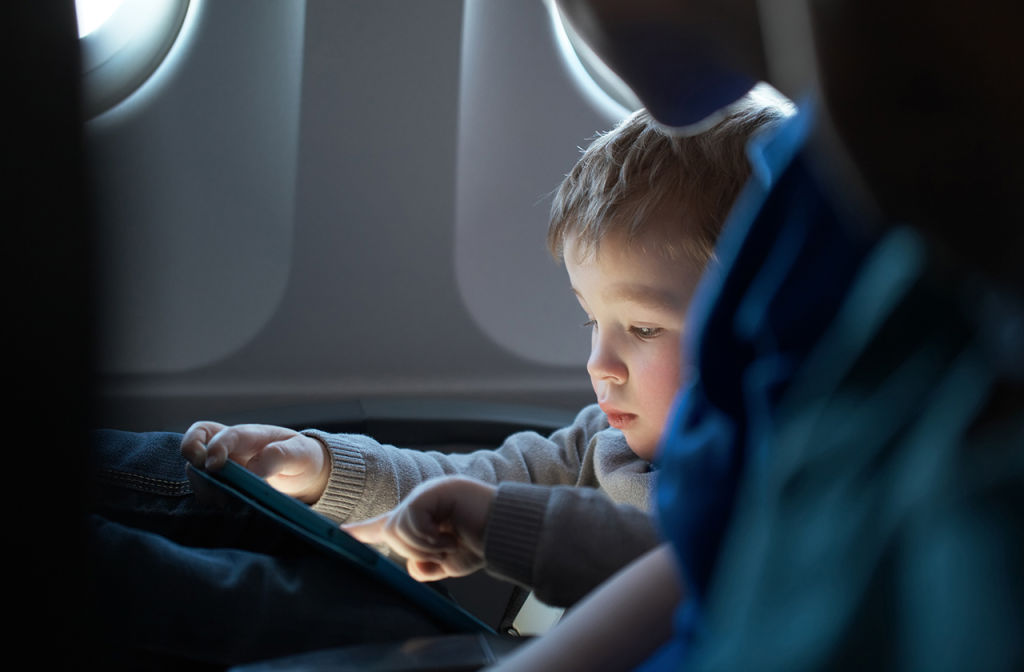 If you decide to impose a strict embargo on games, your child may wind up being left out or feel excluded by their more ‘advanced’ peers, which will inevitably make him/her feel inferior. In the future, this may have even more detrimental effects in terms of social disparity, as the human-PC relationship will be taken to completely new levels.

I am not sure what exactly this relationship will be. It may well resonate with some commonly known dystopias which scare the living hell out of us, and are even more horrifying for our parents’ generation.

We are in no position to stop the trend of increasingly stronger human-PC synergy, but we can show our kids what computers are for. We can exemplify who serves who and who is in control of the situation. We should not allow PCs become our masters, but we can take a lot from them to make out everyday lives better, without selling your soul and losing the ability to communicate in real life.

All in all, if you cannot control a process, lead it or steer it into the right direction. Everything is in our hands!

Let’s shelf that topic for now and return to the topic of computers – in all of its multidimensional meaning.

Today, there is hardly a family without a tablet. Kids are just crazy about tablets and gladly consume any entertaining content they are able to lay their little hands on.

It’s understandable that the content may vary – many parents faced the situation when some games caused hysteria, apathy, entrancement, aggression, violence, which at times resulted in panic attacks, sleepless nights and other types of instant mental disorders (which, when experienced regularly, may become inveterate).

Your kids cannot be left alone on this dangerous platform without an experienced guide. We can and should filter and measure content for it to truly serve the purpose of multidimensional development of your children and help them in the process of self-actualization.

I have put together the list of ten tablet games, which I have chosen for my own kids by now.

How to tame your #iPad: a beginner’s guide to protecting your child’s tablet: https://t.co/KWCcuK85j0 #security pic.twitter.com/oa2aoPVRl7

Of course, it cannot be taken for a professional recommendation of a juvenile psychologist (they just recommend ban gaming for good, which I have already IMHOed above). However, my own experience proves that the balanced consumption of such games (30 minutes per day, provided the child complies with the code of conduct and the daily schedule) promotes the child’s development and makes him/her more approachable for his/her peers. I fell in love with quests back in ’80s when my friends and I were playing Space Quest, King’s Quest and other titles by Sierra Online like mad. I vividly remember, by the way, that this game prompted me to learn English and teachers were just raving about my vocabulary.

Unfortunately, Sierra is no more, but human nature cannot change: there has to be motivation for achievement, and quests have this in abundance. The curiosity (“So, what’s next?”) urges the brain to work, seeking solutions and developing new skills.

To paraphrase Michael Douglas’ character in Wall Street, “Curiosity is good, curiosity works”. Curiosity is the strongest driver of the child’s development, which should be by all means leveraged.

There are a bunch of mobile quests. My recent discovery is Machinarium (h/t Serge Malenkovich). A beautifully crafted world, funny characters, witty missions, a straightforward good-evil paradigm, good cause – it has it all.

My children became instantly addicted to the game, but without any negative consequences. They would not cause their fingers to bleed due to too much arcade in the gameplay, they never got hysterical when the time was up, but I could literary hear how their little brains were working, and everyone was happy!

There are a couple of other nice quests I can recommend (yes, we don’t game a lot): Botanicula and Jack and The Beanstalk.

Another thing you should consider is not the game itself, but the developer. Toca Boca is the company behind dozens of mobile games crafted specifically for boosting cognitive abilities in children regardless of age.

I vividly remember when my two-year old son played Toca Hair Salon and showed me a control gesture completely unknown to me. I saw him doing haircuts to characters, talking to them, and then – wham! – with some gracious gesture he got back to the home screen. Wait, can you show me once again? I did not know how to do this, really! And no one could have taught this to my son! I still don’t understand how it happened – maybe just out of sheer magic of a truly intuitive interface.

One of the latest games of this kind that we have discovered is Toca Nature. Children are able to create their own micro-world, plant forests, create lakes and ponds, build up mountains, inhabit the environment with animals, interact with the newly created world both on the macro- and micro-level, pick mushrooms and berries, feed animals and even take photos of the most exciting moments! All of it is just for less than $4.

Curiosity fuels interest toward specific occupations. There are a ton of mobile apps that gamify natural science disciplines. Just try a couple of games on each subject you remember from high school – maybe this would help your kid understand what

inspires him/her and set a goal from early childhood.

For instance, you can start by Tinybop’s The Human Body. It’s a wonderful app for unobtrusively learning human body in different (sorry!) dissections. There is a parental control feature as well, but we never used it: we played and learned all together.

Why did I cite the developer? Well, this company offers many good games!

The brain is just like muscle. Once you train without warm-up, you produce an excess of lactic acid, which results in quite an unpleasant sensation. Once you train for too long, you can traumatize yourself. Well, that means you brain should also be given a break from time to time, and here’s how we do it on the tablet with my boys.

We do some simple movements with as less mental effort as possible, but ultimately it also serves the purpose of development – for instance, in terms of aesthetics.

A variety of markers would satisfy any taste, so you have plenty of choice. At the end of the day, you are an adult and have already developed a feeling for art in you. So, just go ahead and pick the right game for your kids.

I enjoy Limbo and its clones like OddPlanet or Leo’s Fortune. It’s not only due to its well-elaborated and well-designed universe accompanied with nice music. It’s also due to great balance between the arcade to train reactivity, a conundrum, and other means of training fine motor skills. And, well, its just reeeealy pleasant to the eye. Good job!

So, got some rest? Back to the exercise!

The next mind twister is a little app that helps develop spatial orientation and cure such a common disease as ‘map-hopelessness’. May I introduce you Monument Valley (and its numerous clones)!

It’s an amazing game, engaging for both children and adults. Saint-Exupery’s “Little Prince” universe, Prince of Persia, and paradoxical mind-twisting Esher-esque conundrums are elegantly stitched into the gameplay. Once you scrolled the wheel, the picture changes so much you are not sure Ida stands a chance of finding her way to the destination. But once you scroll another adjacent wheel and press a button –voila! – the entire picture changes and you can get a level-up.

Not only does Monument Valley calm down the child, it makes a hint that the solution to a situation can be paradoxical, so the child should not be afraid to think outside the box: the one who just sits around always loses, and you should move ahead to succeed are the morale behind the game.

Once the night falls, children follow their usual routine: they wash, then brush their teeth, then drink a glass of milk (thrice!), then eat a fried egg (once), and brush their teeth again. It’s time to lie in a cozy bed, turn the lights off and listen to a new fairytale. And it is what the sky of stars, the Sky Guide app (or its version for kids, Star Walk Kids), can give you a hand with.

Interactive sky map, accompanied by soothing ambient music, is a great means of ‘sleepifying’ you kids! Well, parents may also succumb, but they can enjoy head start, as they need to tell the fairytale:

“Once on a far, far away star, somewhere on the hidden end of the Milky Way, 1.5 million light years from Earth….”

Is there anyone who never played Cut the Rope? Well, let you kids stretch their mind as well! I have no idea why my boys call the main character ‘Cowlick.’ Does anyone have any idea what its name is, by the way? Whatever… The game is indeed very good: it

I don’t know how many versions the developer has created, but a huge shout out to him! We have a lot to do in the upcoming couple of years.:)

An exclusive recommendation for small kids: there is a series of apps called Dr.Panda. It’s nothing special, but the game is enjoyed by both kids and their parents, and is useful as well. For instance, start with Restaurant: Asia and gradually see you kid falling for cooking, home chores and other practical skills!

There is one more recommendation for geniuses, prodigies, and just school kids who would like to train their reading and math.

In fact, such apps are abundant and would suit all tastes. There are ones more on the gaming side; there are upper level tasks; boy-centric and girl-centric; those with kittens and those with penguins; those with integrals and integral-less.

To do some tutoring to my school kid, I downloaded two apps: Math Academy and Word Academy. They are quite challenging

tasks, which we started solving together. My son mastered basics in a couple of days and then was completely fine on his own. I would not say it’s his favorite pastime, but due to such sharp contrast the games we enumerated above then seem even more enjoyable and long-awaited.

No comments here: everyone should try this out.

Feel free to offer your kid games in comments to this post!

Hey there! Today’s post will cover something that is vitally important, but often considered irrelevant – the necessity to comply with system requirements. Software developers often cite on packaging and