During my first two weeks of the biochip experience I had time to mull over a lot of things. The deluge of questions from the community pushed this process further: it’s one thing to be left alone with your thoughts and concerns, but when you are constantly bombarded with questions and suggestions, and live in the environment of constant, vivid discussion concerning all aspects of the experiment, it is a totally different story. The questions, at times, tackled serious issues, from emotional comfort to religion.

#BionicManDiary, entry 001: the story of how a chip was implanted into my body: https://t.co/tEawdUC2tj by @cheresh pic.twitter.com/dXwzYUdYSC

I never regretted what I did. Quite the opposite: The amount of questions, as well as their varied subjects, does prove that the entire initiative was not in vain – as this tech is indeed controversial. In order to avoid “The Blade Runner” scenario happening in real life, we have to seriously upgrade, redefine, and debug this technology.

First, let me touch upon the subject of form factor. Feeling the chip under your skin is the very first thing you’ll need to get use to.

I don’t feel it often. Maybe this spot of body between the thumb and the index finger does indeed have a very small number of nerve terminals, or, otherwise, the surgery was a sheer success, but the chip seems to have made itself at home, settling in a small and hidden wrinkle of skin.

There are times, though, when I really feel it inside my hand: For instance, lifting heavy stuff like dumb-bells or groceries. At such moments the chip moves sideways, millimetres toward the index finger.

Sometimes, you wake up to find the chip in another place where it traveled overnight. There is nothing wrong with that, as the maximum distance it can go is limited to a diameter of a nickel.

Having lived like that through a couple of weeks, I must state the following: However marvelous the idea is (I will point out all of its initial advantages in my next blog entry), the first thing we should change — radically! — is the chip’s form factor.

The container is made of smooth and hard USP-grade biocompatible glass, which is not sloughed by living flesh and stores a small circuit bearing basis logic functions: a read/write block and a memory block, which is activated in the field of the RFID receiver.

That means the chip is activated only when positioned in close proximity to the object, such as a subway pay gate or credit card reader.

It works well, in general. However, this form factor is more suitable for seamless injection, but in order to withstand prolonged presence under the skin it is not an ideal solution.

Where to locate the chip, as per Da Vinci

The spot between the thumb and the index finger did not turn out to be the best zone to place the chip, as in practice it is not convenient for everyday use. For instance, when passing through the subway pay gate I intuitively wish to do a swiping gesture or touch the reader with fist or wrist.

Make things as simple as possible, but not simpler

I approached different readers over 1000 times, and can assure you that the bionics should employ the same usability tests and user experience trials as with mobile apps, which were inspired long ago with the Okkama’s Blade. With respect to that, I like Albert Einstein’s saying the most:

“Make things as simple as possible, but not simpler.”

When applied to the chip in my hand, it means that a person would need to twist his hand to receive acceptance by different readers, but the less he does it, the better. The chip should be placed in a manner that allows for comfortable interaction with any device stored before one’s eyes, or the distance of the outstretched arm. I think old Da Vinci already hinted at this approach in his Vitruvian Man. 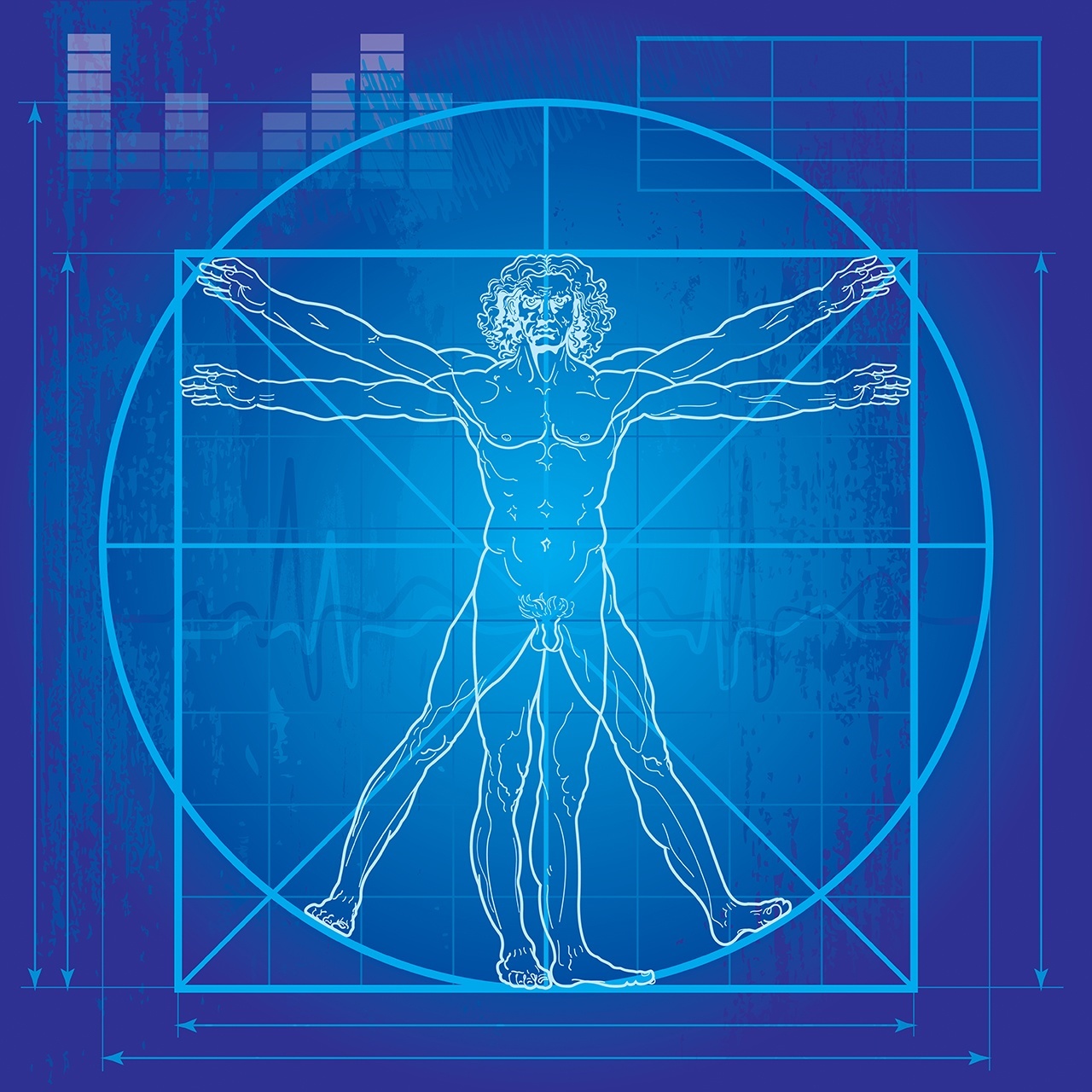 While walking in the subway, in the office building, and in shopping malls (the chip still cannot serve as means of admission, but the readers react on its presence, raising many eyebrows), I have identified the spots which would ideally suit chip implantation:

The most convenient zone to place a chip is located in the center of the outer side on the hand. If the chip is implanted into this spot, it would be convenient for the bearer to unlock many types of locks, pay on POS terminals, interact with smartphones and tablets, and pay at the public transport pay gates (at least at those which are stationed as bus pay gates, not as those used in the subway). 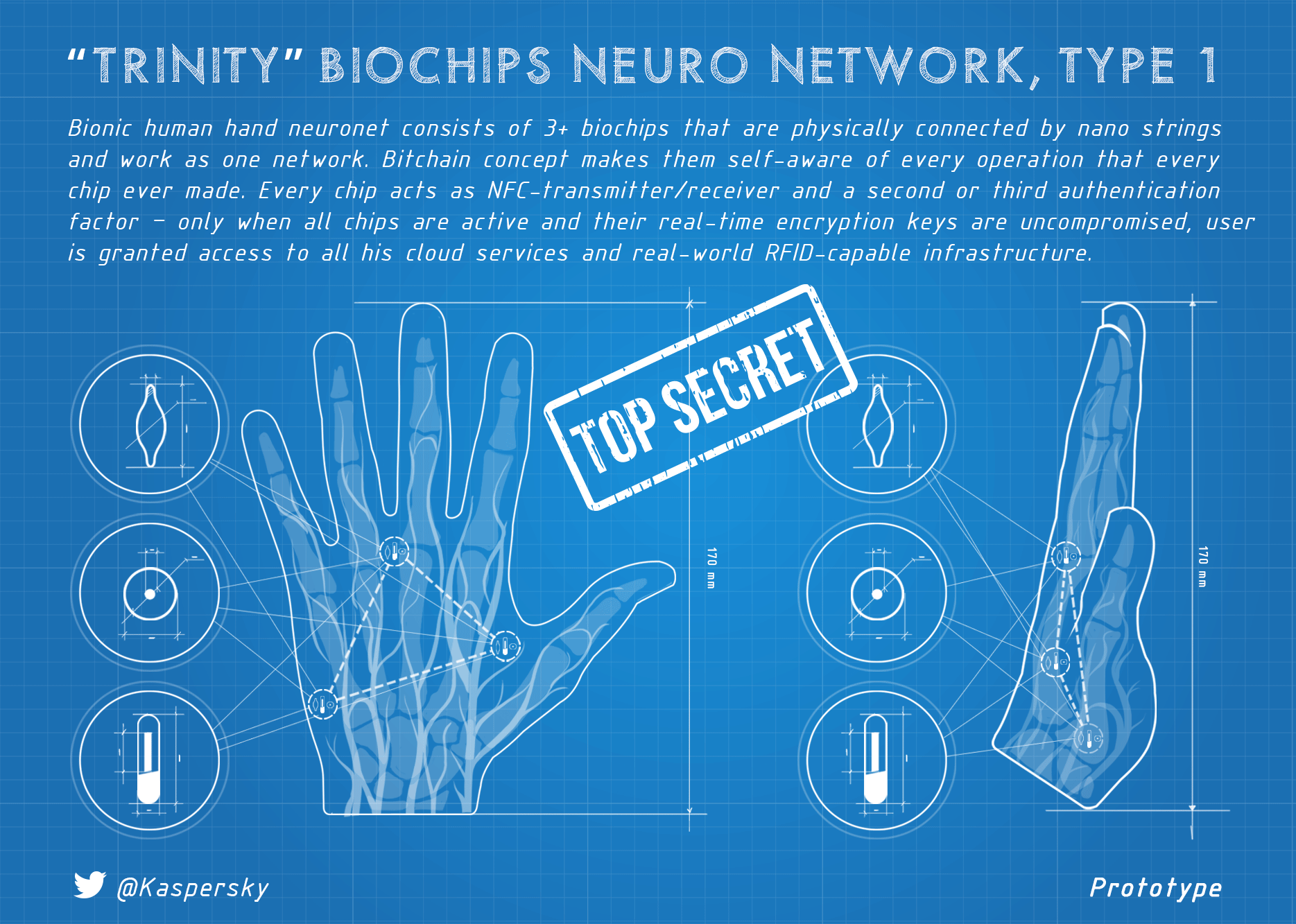 #2 in my personal top list is the zone located on the sharp of the hand, just in between the little finger and the wrist: if you clutch your fingers into the fist, you’ll see a small wrinkle precisely where the chip could be implanted.

#3 top convenient chip implantation zone is located between the knuckles. In this case, in order to interact with a reader, you could punch it tenderly which is a very intuitive movement.

In reality, there is no ideal solution here. In order for a chip implantation zone to become universal, we would need to unify all readers on the planet.

Even if we go for it, it is not going to be easy. People are very different: they vary in height, are right- or left-handed, might have problems with limbs or even have no limbs at all.

To cater to all of humanity’s interests, we could implant several chips, so they could interact and perform tasks (like a small LAN), or a chip should operate in fields beyond several centimetres.

Technically, the second option is plausible, but is bound with extra security risks: potential attackers could remotely access the data shared between the chips by using a beam antenna — a method widely employed when hacking via Bluetooth.

Biochip has to root

But the location of the chip is just a part of a bigger problem. Remember I said the chip travels under the skin? This issue also has to be solved. I employed all my product management skills in combination with The theory of inventive problem solving and see the solution as follows: 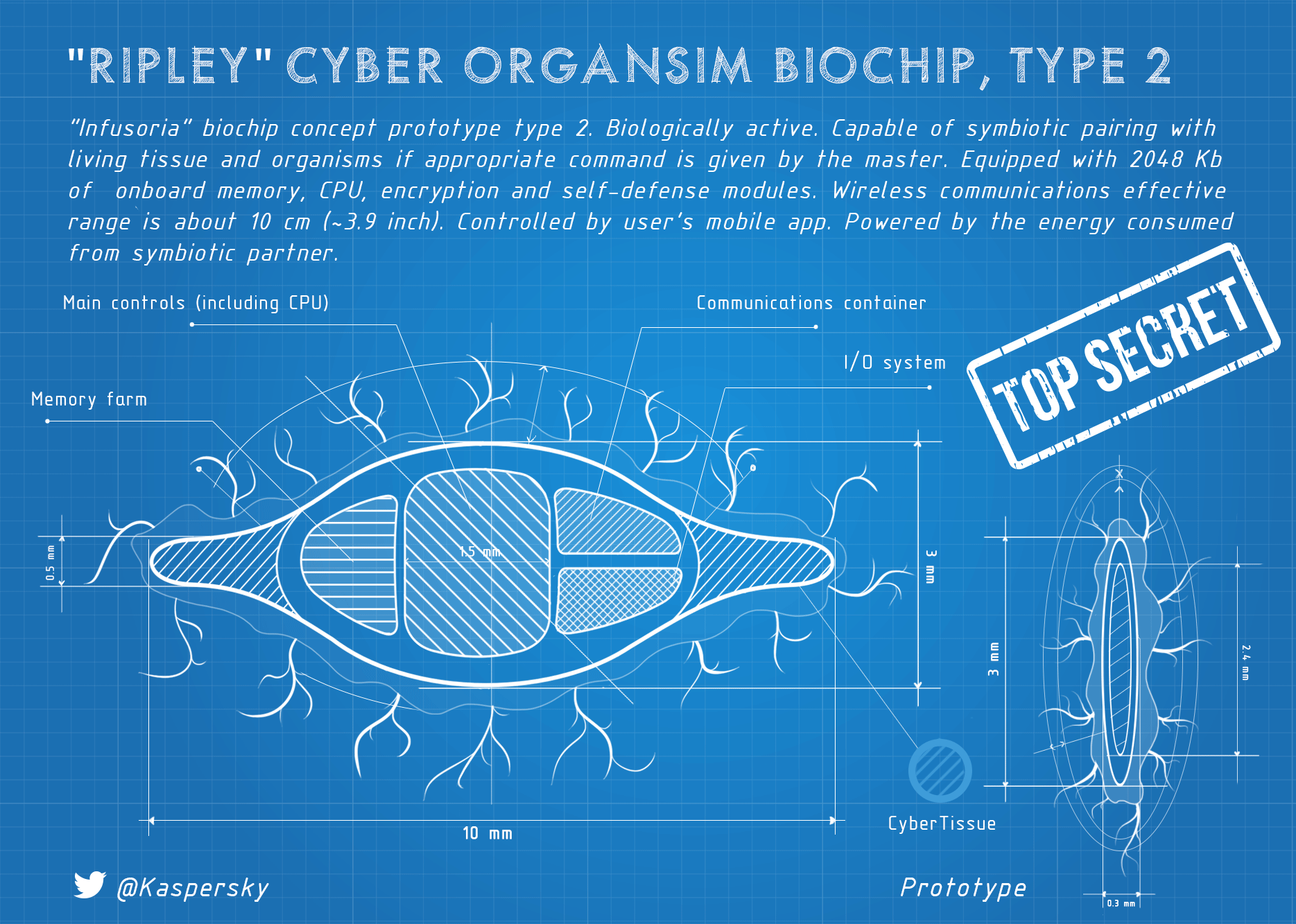 In order for a biochip to become absolutely user-friendly, it has to be reshaped and adapted to cater to the user’s needs. The main requirement in this respect is varied condition of the chip itself:

In its first condition, the chip should be maximally sleek and compact in order to go under your skin as smoothly as possible, and be absolutely impalpable wherever it ends up. The chip should also remain in the sleep mode and deactivated.

After the injection, the user must be capable of doing two essential things. The first one is to invoke the chip, literally: the only chance the chip will feel seamless and not move under the skin is if it literally roots into the user’s body.

In order for this to happen, this live chip needs to slowly, over the course of the days, grow very thin ‘roots’ to fix itself stably in the living organism and become an integral part. At the same time these ‘roots’ may become the means by which the chip to powers up or connects to the neuronal system. 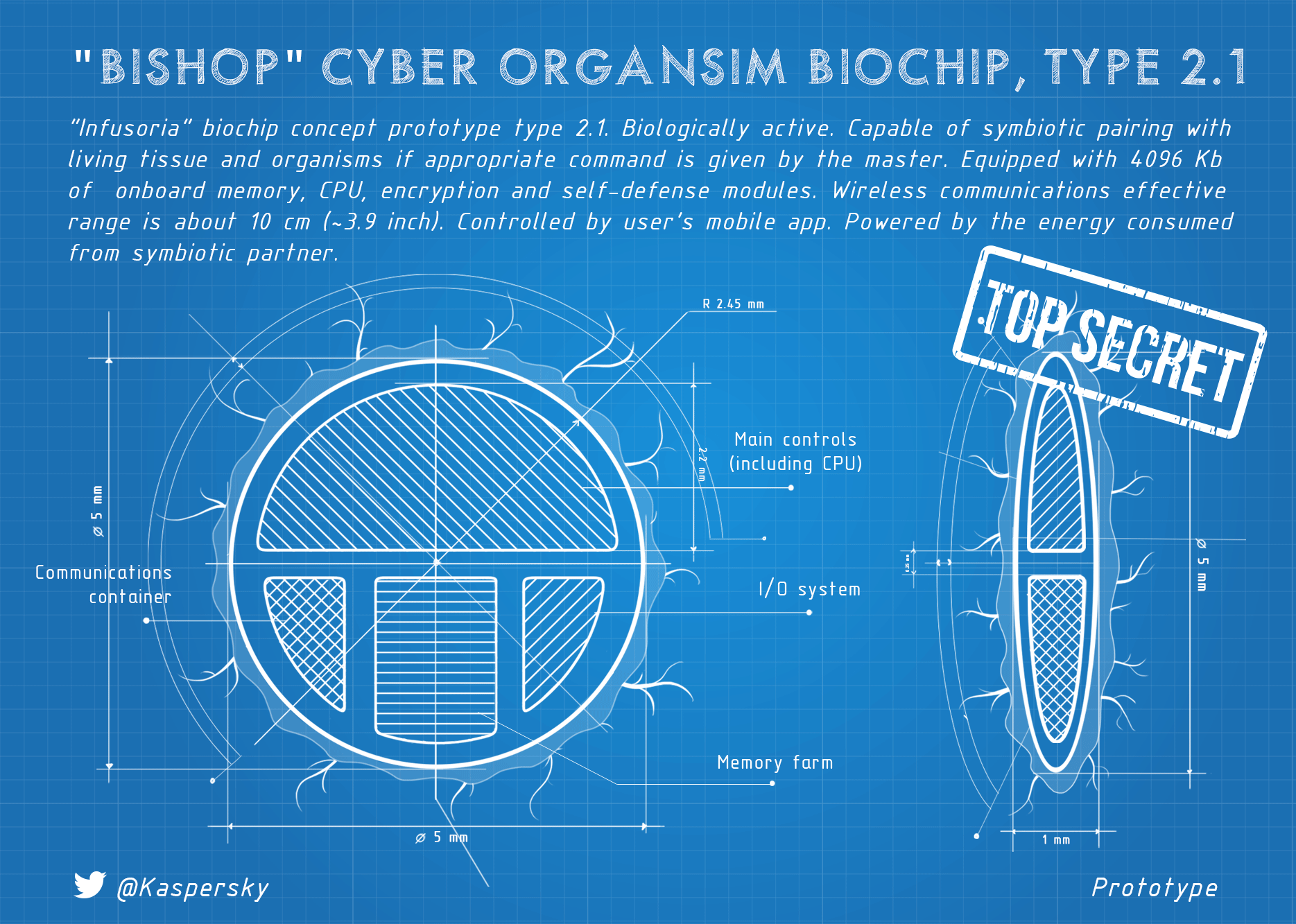 However, the time might come when I – the user – would want to get rid of the chip – whether it is a necessity to upgrade to a more sophisticated or up-to-date chip, or technophobia-inspired paranoia and the imminent desire to run to a remote Mexican beach where I could sit on the sand and sing Kumbaya until the day I die.

In such an event, I should have an opportunity to immediately take my personal data, encrypt it and send it to the cloud. And then, the chip should be destroyed. It should be literally killed: at first, it should lose its ‘roots’ (just the way strawberry cirrus droop and decay) and turn into a sleek and smooth piece of substance which might be easily extracted at home by means of a scalpel, an anaesthetic, and a pair of pincers.

There is one more option: such chips could just dissolve as soon as deactivated.

One of the most popular readers’ inquiries sublimate their secret fears: “What if criminals cut off your hand and use your chip?” Unfortunately, I have to admit, it is quite feasible.

There are millions of things the culprits need to know in order to perform this brutal hack. First, someone has to know exactly where the chip is located, and, ultimately, cutting off the living flesh is way more than simply sneakily stealing passwords over the Internet, so the culprit has to be either in an extremely desperate situation, or a badass thug. But, in general, it is a very fair point.

Me talking to office security ppl explaining how the biochip in my hand would be used as office key #BionicManDiary pic.twitter.com/l99jgYdwld

In order to close this vulnerability, we have to make the chip completely inoperable when separated from the lawful bearer. The chip extracted by this or that means from the body of the owner just has to be damaged beyond repair.

There have to be methods in place to prevent the data theft in any plausible scenarios (including when in the state of controlled sleep). To lower the odds of the chip being hacked, it might employ other authentication factors (like voice recognition or a hardware token located in a place known only to a rightful owner).

Feel free to offer your scenarios in the comments to this blog post: how do you see the outfit of the chip, what use cases should be taken into consideration, etc. This is what the entire experiment is about: to test the craziest ideas, which could pave the way to important discoveries.

#BionicManDiary, Entry 002 — The one where the chip started to toss and turn at night

My next entry will be focused on how I managed to bypass my own biochip’s password to unlock the screen on my phone, and the findings I want to convey to app developers.

P.S. All blogs and tweets can be found by #BionicManDiary hashtag.
You can ask ALL of your questions (no limitations!) via Facebook or Twitter. I will do my outmost best to answer 100% of them.