Modern smartphones consume so much energy that charging them once a day is not always enough. When they are used intensively, the user sometimes has to look for a power source in the middle of the day, and charge their device whenever and wherever possible. At first glance, it seems absurd to worry about safety in these circumstances. You plug the smartphone into a socket and it starts charging – the same as with a flashlight or a toothbrush, right? But, in fact, there are some hidden dangers which you need to be aware of. 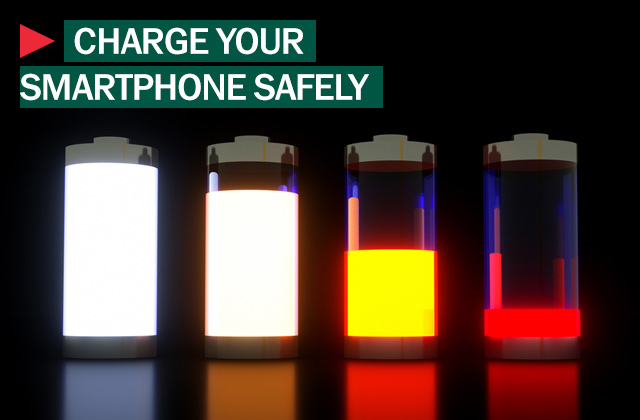 Theft
The most obvious risk is that the smartphone is usually plugged in to a socket, PC port or other source of power while it charges. This is not a problem when at home or in a safe office; in other places, however, leaving a smartphone unattended while it recharges is fraught with risks. Obviously, not many people are likely to leave a smartphone unattended while it charges in a café or an airport, but some may risk leaving it on an office desk or in a car. This often ends with the phone being stolen (perhaps after a break-in) and it is better to interrupt the recharging process and return to it later, rather than trying to find a stolen smartphone. If that isn’t possible, at least try to conceal your smartphone as well as possible. What you can do is cover the device and any wires with papers, a scarf or jacket etc. The most reliable solution to this problem in a public place might be automated chargers which have appeared over the past couple of years. Each of them is a storage box with a socket or a set of cables in every cell to recharge different kinds of smartphones. You can also find a socket in the safes of a number of modern hotels.

Data leakage
When charging a smartphone from a PC, or connecting it to a USB port in a car or plane, we rarely consider the possibility that information may be exchanged, as well as power. It’s no problem if you are connecting to your own PC, but you should be cautious with other people’s PCs and different kinds of “on-board entertainment systems.” Settings vary on different smartphones – they often automatically connect using PTP or MTP modes, and the connected PC can upload all the relevant files from the smartphone. This is especially annoying if you store confidential photos on your smartphone. This behavior is more frequent than it might seem – the automatic upload of photos is a standard setting of many photo album managers, Dropbox and similar applications.

If the smartphone automatically connects when it is in removable media mode (UMS, Mass storage), that makes all files in the internal storage accessible to the PC. These may include documents as well as various data backup copies created by applications and many other things.

The easiest, and usually quite effective, way to avoid these problems is to switch off the smartphone completely before charging it and keeping it switched off until the procedure is completed. In this case, when connected (to the power source) it will only run the battery charging process and show the appropriate screensaver – nothing else. If you need to stay connected, you will have to study the settings of your smartphone carefully. If, when connected to a PC or entering the settings sub-section you are invited to choose a mode to connect with a PC, the best default option would be to choose “Only charge,” selecting other temporary modes manually as required. With some smartphones you can enable a protection code, which needs to be entered to establish a connection to the PC. For some Android smartphones additional applications are available that can implement the protection alternatives described above.

The easiest, and usually quite effective, way to avoid these problems is to switch off the smartphone completely before charging it and keeping it switched off until the procedure is completed.

Virus infection
This threat is not that considerable, but users should still bear it in mind. An Android-smartphone with debugging mode enabled can receive different kinds of administrator commands via its USB port, and applications can be installed on it in a number of cases, including malicious ones. Any smartphone in removable drive mode is effectively the same as a flash drive, and an infected PC can copy a PC virus onto the phone. It won’t be dangerous on the smartphone itself, but infection cannot be ruled out the next time you connect it to your computer.

Protecting against this threat is quite simple – you need to disable the debugging mode in Android (it can usually be found in the “Developer options” settings group) and ensure that installing applications outside of Android Market is prohibited (“Security” settings group). Also, try to avoid using UMS connection mode (removable media) on all smartphones (not only Android) and give preference to player and camera imitation (MTP and PTP). Installing a smartphone protection system which includes an antivirus would also be useful in this respect.

Watch what you ‘eat’
An unsuitable charger could have a whole range of elaborate and very unpleasant consequences for the smartphone. A simple experiment shows that most smartphones are recharged from any charging device with a compatible jack – but charging like this is often less than ideal, e.g., takes too much or too little time. As a result, the battery may not be charged completely, the accumulator overheats, cuts off or reboots the smartphone. This can lead to partial data loss and even the total failure of the smartphone. This sounds like a horror story, but it happens quite frequently, especially with modern models with high power consumption.

Note: All smartphones charged from a USB have a supply voltage of 5 volts. While the charger voltage may vary from 500 to 1500 мА, with new and powerful models values tending to start from 1000. It is not necessary to strictly comply with the voltage of the charger while using an “alien” adapter, but you should not exceed the normal rate more than two times.

Even the batteries themselves can be problematic. A team of researchers from the Georgia Institute of Technology found that they could inject arbitrary software and other code into an up-to-date iPhone 5 mere minutes after plugging the device into a maliciously crafted battery. They will demonstrate that attack in a briefing at the Black Hat security conference in Las Vegas this summer. The battery is fairly cumbersome according to the Verge, but the Researchers claim that for all intents and purposes the malicious battery is the same as a mobile charger, which could be made less conspicuous by a motivated and well-funded attacker.

Of course, the easiest advice would be “only use the charger that comes with the device,” as recommended by the manufacturer, but in real life this is not always possible. Therefore, when you are using “alien” chargers for the first time, try sticking to the following rules:

Your guide to safe and private online dating

VPNs and Why You Should Use Them

Virtual Private Networks, or VPNs for short, have become increasingly essential of late as we more often access sensitive data from remote locations — and as the threat of having our