Hackers belonging to the LAPSUS$ cybercrime group have published screenshots, allegedly taken from inside Okta’s information systems. If the claims are true, they have access not only to the company’s website, but also to a number of other internal systems, including quite critical ones.

LAPSUS$ claims that they did not steal any data from the company itself, and that their targets were mainly Okta’s customers. Judging by the dates on the screenshots, the attackers had access to the systems as early as January 2022.

What is Okta and why could the breach be so dangerous?

Kaspersky Lab experts believe that the hacker’s access to Okta’s systems can explain a number of the rather high-profile data leaks from large companies, for which hackers from LAPSUS$ have already claimed responsibility.

At the moment there is no conclusive evidence that the hackers really gained access. According to an Okta’s official statement, its specialists are currently conducting an investigation and the company promises to share details as soon as the investigation is completed. It is possible that the published screenshots are related to the January incident, when an unknown actor tried to compromise the account of a technical support engineer working for a third-party subcontractor.

Updated on March 23, 2022: LAPSUS$ has published their reply to Okta’s official statement in which they accuse the company in attempts to downplay the impact of the breach. 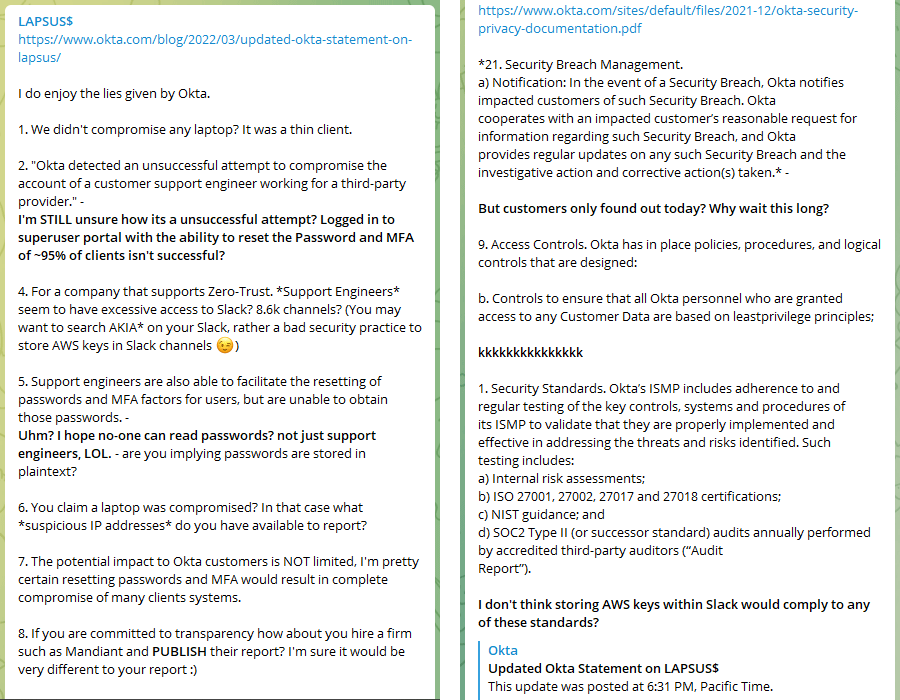 Who are the LAPSUS$ group and what do we know about them?

LAPSUS$ gained fame in 2020 when they compromised the Brazilian Ministry of Health’s systems. Presumably, this is a Latin American hacker group that steals information from large companies for ransom. If the victims refuse to pay, the hackers publish the stolen information on the Internet. Unlike many other ransomware groups, LAPSUS$ does not encrypt the data of hacked organizations, but simply threatens to leak the data in case of non-payment of the ransom.

Notable victims of LAPSUS$ include Nvidia, Samsung and Ubisoft. In addition, they recently released 37 GB of code believed to be related to internal Microsoft projects.

How to stay safe?

At the moment it is impossible to say with absolute certainty that the incident really happened. The publication of screenshots in itself is a rather strange move that may be aimed at self-promotion of the hackers, an attack on Okta’s reputation, or an attempt to hide the real method by which LAPSUS$ gained access to one of Okta’s clients.

That said, to play it safe our experts recommend Okta’s clients to employ the following protective measures:

Companies that do not have the internal resources to monitor suspicious activity in their IT infrastructure can employ the external experts.

Scammers eye MetaMask: how can you stay safe?

What is a seed phrase, how scammers use it to steal cryptowallets, and how to protect your MetaMask account.